Letter of Thanks to All Who Voted for Bear Rescue Facility 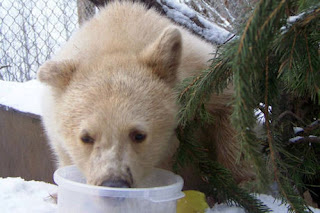 Thank You!
I'm so happy I was rescued by Northern Lights Wildlife Refuge, Bear Rescue Facility! I really missed my mother's milk and they fed me. Next year I'm going home because I'll be big and strong and healthy. Thank you for giving me my life back.
Clover the Kermode
a,k.a. Spirit Bear
Photo courtesy of NLWS:
Clover when he first arrived at the shelter.
Can you believe it? 21,465 votes in 12 days!! Thank you to everyone who voted for the Bear Rescue Facility at the Northern Lights Wildlife Shelter. It's been a wild ride, but so many of you supported our cause we safely got through it in the Top 10, and now it is up to the judges. We finished in 3rd place with 6,977 supporters, which is a good spot to be for the final judging. The final results will be available January 25, 2012. So, we can all take a breather, have a Merry Christmas and a Very Happy New Year! Thank you again for all your help.
Sincerely,
Betty Gelean

Children of the Fog by Cheryl Kaye Tardif

A parent's worst nightmare—a mother's greatest fear. This story of terror, fear, remorse, and unfulfilled closure is deftly written. The contrast between the sweetness and light at the beginning and the bleak blackness and despair in the midst of the horror is overwhelmingly realistic. The excruciating pain of not knowing, coupled with the feeling of guilt—she should have done things differently, she should have been able to save her child—chews at the mother's insides. This very dark story may seem over the top with other problems running throughout but it is not. Trauma flattens the soul, the voice is still and dead or shrill and frenzied as different parts of the story unfold.

As a mother myself, I found this an emotional book to read, and yet I was mesmerized by it and couldn't put it down. Cheryl Kaye Tardif brings detail and personality to every book she writes. Midway through this story as our protagonist Sadie runs from the myriad upheavals in her life into solitude, a shift in the feel of the book follows her and leads us into a different place, a place of temporary respite from tragedy, bringing us into nature and the natural order of things, however brief it may be. But when Sadie sees glimpses of children and hears childish laughter in the woods, is she hallucinating? Who is leaving her little gifts, and why an onion for goodness sake? What does the crow that taps on her window have to do with anything?

The suspense builds up until it spills over in this tense story. Is it God? Kismet? Fate? Something or someone is driving Sadie deeper and deeper into the fog and dark. She must keep her wits about her to understand what is being shown her. This book tugs at the heart and dredges up our fears and mortality. A tale of innocence and evil well told, with an ending that will both thrill and chill.
Posted by nightreader at 6:43 PM No comments:

How would you prefer to spend Christmas, in jail or doing community service? Gertie and her group of investigators, The Trouble Busters, naturally chose to do community service. The Trouble Busters, possibly considered to be The Trouble Makers by the judge, is a group of three "older" women who have been charged with obstructing justice. Living with her 92 year old mother-in-law, Gertie has a secret motive for suggesting they do their time at the assisted living home in Trenary, in the Michigan Upper Peninsula. She is hoping Grandma, her late husband's mother, will like it so much she will elect to move there, especially since an old boy-friend Earl is there, so she has included in her group of forced volunteers her thorn-in-the-side mother-in-law, and Gertie's companion dog Fred, a German Shepherd. An ex-police dog, he is easily the most capable member of the investigators.

What they don't realize until already committed to volunteering there, is that Earl is a joker with a nasty bent. Being served "chocolate" candies that turn out to have a distinct odour that he "made" himself, it doesn't take long to decide this choice was not particularly a good idea. Unfortunately for this zany group, they are stranded there when they are cut off from escape by a huge snowstorm. The staff takes advantage of the new arrivals to take a day off, leaving them almost solely responsible for the residents and under the watch of the intolerable head of the facility, Nurse Shrank, a seriously scary thought.

With a mixed bag of equally zany residents including a former mailman deathly afraid of dogs, and Nurse Shrank, a nightmare waiting to happen, the fun begins. When Gertie discovers a body in the basement she knows this definitely was a bad idea. With the phone lines down and a raging snowstorm isolating them, they are stuck with whatever is going on. Definitely not where anyone wants to spend Christmas! Especially when almost everyone falls into a deep sleep after lunch, including the staff and Fred. Deb Baker has concocted a very unusual and funny holiday mystery with her group of protagonists. This novella can be read quickly and the antics of the characters will entertain. How the inmates of the assisted living pull off their stunts as well as cotton on to what is going on that shouldn't be at Applegate, better known as Hellsgate by Gertie, is quirky yet intelligent. I enjoyed this romp of a mystery and the "volunteer" group. I must admit to the fact that this is my first, but not my last, visit to Gertie Johnson's life.
Posted by nightreader at 5:14 PM No comments:

Gumption and Grit: Women of the Cariboo Chilcotin edited by Sage Birchwater

"Gumption and Grit: Women of the Cariboo Chilcotin, Extraordinary Women Vol. 1" is a well-edited book featuring the stories of 35 women who helped make the Cariboo-Chilcotin area in central British Columbia what it is today. Sage Birchwater has done an amazing job of editing this book. These are survivors of hard work and isolation ranging over the decades of the gold rush, the land rush, ranching, farming, married to men who are married to the land or to their work, leaving their wives to do everything else. Some of these stories are told in the first person, some are not. Their stories are all well-told. They all come from different backgrounds, some have always been there and some came from cities, usually to teach. All the way through the first half of the twentieth century the land was still worked much as always. Technology came late to this part forested and part desert land. The one thing in common geographically seems to be the rocky land.

We learn about such diversity of family life as living in one-room log cabins, no plumbing, no electricity. Women having their babies wherever they end up being born because of the distances between populated areas. Especially bad in the dead of winter, because this area is extremely cold and dangerous for travel. In most of these stories roads were either bad or non-existent, there were no telephones. One woman's story ties in with the arrival of communications when she married the linesman who installed and maintained the brand new telephone lines, often going with him as he worked. These pioneering women had to be as innovative as the men, often working alongside them.

I found the story of Josephine Gregg of particular interest. She lived her life in two cultures, and her story demonstrates how difficult a simple slip of the pen when her birth was registered caused her to fight for thirteen years to get her status as the daughter of a Tsilhqot'in Indian mother and a Scottish father.

The latter part of the book are post-WWII stories. The Cariboo-Chilcotin is still sparsely populated in many areas although Williams Lake and Quesnel have grown tremendously through the years. The area between Highway 97 and the West Coast is one of the more isolated areas of British Columbia. The stories in this section show the women struggling to make a difference in their lives and their world, the struggles are different, but the strength of will, gumption and grit remains. This book is a great read of the development of the wild west of Canada. Men & women were often equal partners in developing the land but the women demonstrate true grit in determination, overcoming obstacles, giving birth in terrible conditions and often alone. This is a slice of Canadian and British Columbian history rarely heard of and well worth reading.
Posted by nightreader at 6:25 AM No comments: