I found this short story a bit unusual, considering it begins with action fully engaged with an already captured Jake, an FBI agent with beatings and bondage attacks perpetuated on him, a man who reacts with a taunting comedic attitude. Who are these brutal terrorists? Where is his backup? Once rescued, Jake belittles his abilities, even with his serious injuries. Personally I found his demeanor to be much like the old '40s movie detectives I so enjoyed in the past, especially Sam Spade.

What he really is trying to do is take down terrorists, who happen to be attacking the satellites surrounding the earth, including Soyus and the Space Station. Of course with so many now circling above us, the fact that they are disappearing one by one does make it necessary to actively react to this type of attack to save the lives of those on the station. How he is going to do this with all his injuries is moot, he's going to do it anyway. The race is on to locate the beam that is destroying the satellites, it's known that it is originating from earth, but where? Will he be in time?

A fun look at governing agencies and quirky adventure, I enjoyed the book, even the 0.5 title.
Posted by nightreader at 7:58 PM No comments:

written by Leighann Dobbs and Harmony Williams
review from e-book

What a different time and life in Regency England. What an interesting story within the time of Regency! What a surprise that the main character is the daughter of an Earl and her heart's desire is to become a detective! I enjoyed reading this unique story with so much historical accuracy of the life and times. No wonder Lady Katherine wishes to escape the norm and become a detective like her father.

It is a time of invisibility of females as persons, a time of seeking "approved" marriages for young maidens and of course that means seeking a high society and rich suitor to marry them. Mothers pushing their daughters to marry well, often calling on matchmakers to arrange a perfect match, as in seeking title and wealth, never mind compatibility.

I loved the blossoming of Annie, as well as the compatibility of this particular pairing. Annie is the downtrodden believed by everyone to be the one no one would want for a wife yet she alone will marry well. I also found it hilarious how the system worked in those days! Matchmakers, mothers, daughters, Lords, Earls, Dukes, everybody wants to be part of the aristocracy, I would say mostly mothers for their daughters with no thought to what these men might really be like. Even more, they seem to switch around. Who is with who? Who would rather be with someone else? Love certainly doesn't seem to be a part of the picture. But what is the picture? Murder seems to play a pretty big part in all this. Why? Can Katherine find the murderer before anyone else is attacked? Or will she be the next victim. Lots of red herrings in this search for a murderer. For that matter, it's pretty "fishy" trying to find out who is where with maidens all changing partners.

Will Lady Katherine get her wish?

Posted by nightreader at 2:01 PM No comments:

Spies and Spells by Tonya Kappes

This book was fun to read, especially when our pre-witch is getting frustrated and wants to become whatever is her future when Witchy Hour comes. In the meantime, she has her "familiar" which of course is a black cat...NOT! Maggie must be the first witch-to-be with a non-animal familiar named Vinnie and he not only gets her where she's going but makes sure she is safe, because Vinnie is a car. And not wanting to give spoilers, I won't say more about this familiar other than to say with him along, this book really picks up speed and laughter, my laughter. I loved the book, completely entertaining. Not quite your usual cozy witch, impatient, often bored waiting for her own particular magic to kick in. When it does, she will be very surprised at what her future is meant to be.
Posted by nightreader at 1:44 PM No comments:

Mad as Hell - Do You Want to Know a Secret? 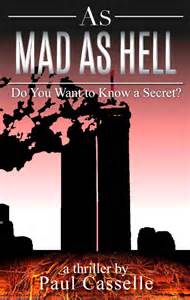 One thing about Paul Casselle, he really knows how to tell a story and keep the reader involved. This thriller is no different. Many thrillers are based on either actual cases, old cold cases, murder and/or conspiracies and as such contain strong or offensive language, so reader be prepared.

This is the second book I've read by Paul Casselle and it is full of conspiracy theories, particularly those that are well-known, thrills, murder, characters representing CIA, MI6, and other groups, especially BIG money. But what draws me in the most is the feeling that I am watching a play! This is in no way meant to belittle the book, but an enhancement to the spell it casts. An interesting thing for me to think, but it definitely gets me involved in the story. I find myself engrossed with what is happening as though I am there. Somewhat as in the first book, characters appear and disappear in the blink of an eye. Once again the matter of who is with which group, who is dead (or "deleted"), who is alive to play their parts in these conspiracies is fascinating but constantly changing. Just when you think you've "got it" it slips away again.

The book is not just another thriller, it has a life of its own. Reading it not only grabbed me quickly, but it presents with a sense of humour at times. I really enjoyed this book, the second in the "Bedfellows" series. If you've read and enjoyed the first, you are sure to enjoy this one.
Posted by nightreader at 1:14 PM No comments: