Warnings: The True Story of How Science Tamed the Weather by Mike Smith 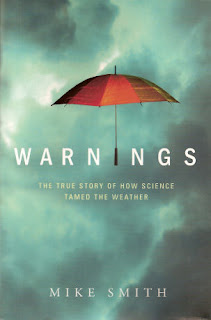 When I first requested this book for review, little did I know I would be reading it and beginning my review amidst forest fires, smoky air, and strong wind gusts! My interest in requesting the book is twofold: I recall Hurricane Frieda ripping through Vancouver, B.C. in 1962, a very rare event for that area; my Dad's cousin was the weatherman who was first to recognize and forecast it, returning to work to do so on TV in Portland, Ore. Weather has always fascinated me, not only because "everybody talks about the weather"!

"Warnings" is very easy to read for the layman. I was shocked to learn how lacking some of the basic things we now take for granted were, such as no tornado warnings as recently as the 1950s, in some areas of the U.S. even more recently. Not a hint! How many lives must have been lost needlessly in past years? Mike Smith has done his research, has lived his research, and knows how to deliver it. The book is historical, accurate, and personal. I was hooked on the Introduction which primes the reader for the main event, or in this case events, to come in this book.

Smith gradually builds from its early beginnings the study and workings of tornadoes in terms anyone can understand. The subject is fascinating as he writes it. By two-thirds through his book I am amazed that the few trips I have taken by plane were successful strictly on the basis of weather! The growth of knowledge, and the way that growth comes about is exciting and tragic at the same time. When the investigations turn to storm-chasing, the reader learns just how important this scientific information-gathering becomes, not just another daredevil stunt among adventure seekers as we might see on TV.

I found the information on Dr. Fujita's methods and discoveries to be well explained and the ignorance of the official weather prognosticators in their cocooned refusal to accept his discoveries almost inevitable, yet unacceptable and disastrous. Even when changes were made, neither pilots nor airport control staff were made aware of impending tornadoes, or "microbursts" (explained in the book) until very recently, a ruling referred to by Mike Smith as "bureaucratic myopia". This is non-fiction, but gave me the shivers in the same way as a thriller fiction would, especially with a very close call that was averted not by a weather warning, but because of a power outage at the airport just prior to a landing, causing the pilot to abort the landing.

Did you ever wonder how the newspapers got their weathermaps so up-to-date? Did you ever wonder how Doppler Radar came into being and how it works? These are questions I'd asked myself through the years and they are covered in this impressive book. This is not a large book, nor do you have to be a meteorologist or savant to read it. Nor does it deal exclusively with tornadoes. It is all written in simple language. There are also a number of photos in the book. While this book deals mostly with the U.S., it is of global significance.

Not surprisingly, the most critical event in the book is Hurricane Katrina. Among other things we learn what could go wrong with the forecasts’ timely releases, what did go wrong and why, and how they tried to get the evacuation process going while there was still time. The survivors were literally 'hung out to dry' as buck-passing and meals in high end restaurants took precedent over people. How many more could have survived if it weren't for the bureaucratic mumbo-jumbo and selfishness? The night of August 31, 2005 should be etched in their memories forever as deaths of survivors began to pile up. If bureaucracy hadn't fumbled the ball, the meteorological scientists would have netted it.

This is a fascinating book, full of suspense, telling it like it is, and a great learning experience without realizing just how much of what you read will stay with you. I highly recommend this book, it opened my eyes to the difficulties people 'in the know' deal with not just occasionally, but on-going in their efforts to keep us all as safe as possible. We know that paramedics, firemen, rescue teams all do this as part of the job, but we rarely think of the background to catastrophe. Winds, flash flooding, and the deadliest for a city below sea level: a storm surge. All closely watched. One last tornado is included: Greensburg, a town that disappeared, but has risen again. As an added bonus, this book is interactive. There are symbols scattered throughout which direct readers to a website where they can find videos, related information, and more.
Posted by nightreader at 12:34 PM

Ms. Smithers, Wonderful review. As a fellow meteorologist and friend of Mike Smith, I know how passionate he is about weather. If more people read this book, we'd all be a lot safer just from the inspiration to take weather more seriously than we do.
Brad Barton, Chief Meteorologist, WBAP 820AM/96.7FM DFW, Texas.
bradsweather.com

Thank you for your comment. I've posted my review on several sites, so hopefully more people will read the book. If anyone is interested, the meteorologist I mention was Jack Capell, what was referred to in Washington & Oregon as the "Columbus Day Storm", in BC it was called Hurricane Freida. Some called it Typhoon Freida. October 1962.

My husband and my son would love this book. Great review. I'm going to check my library for it!