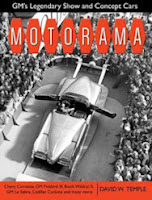 What a great decade the 1950s was for fabulous and fantastic automobiles! Not just the decade itself, but for the many futuristic cars, '...legendary show and concept cars'. Every year we would look forward to seeing what the new ideas would be, what we might expect in the future. Little did we know then that the future would bring little boxy cars that you might have to plug into your electricity! I have so many memories of those wonderful dream cars of the future. Who would have guessed a Cadillac would someday be almost half the size and even come in something like a station wagon, called an SUV.

Personally, I was thrilled to receive this wonderful book of memories to review. The real creativity came with the entry of Harley J. Earl into the fold. Of course it took a somewhat creative mind to realize the perfect person to hire as Styling Engineer. The GM President in 1927 who takes that honor was Alfred P. Sloan. His forward thinking was a masterful piece of history. Early models were created first in clay. It was a good choice of medium at a time when photos were only in black and white, and just did not have what it takes to present a concept idea. In the 1930's another excellent addition was made to their concept group, William L. Mitchell. These great innovative artists gave us beauty in transportation.

Perhaps it took the 1933 'Century of Progress' Worlds Fair to get the show on the road as they say, where a Cadillac V-16 was shown, 'the Aerodynamic Coupe'. In 1937 the first acknowledged concept car, the Buick Y-Job was shown. Through the years many of the concept cars had names like Project X, Project XP-8, XP-300, a GM LeSabre featured two containers, one for gas and one for alcohol. Body designs were incredible and indelible to memory. Longer hoods, bigger fins, no fins, longer trunks, it seemed that nothing was impossible. Fantastic new radiator grills, wraparound windows, even the 12 Futurliner buses.

It wasn't until WWII interrupted that concepts changed. Everything was harder to get in the way of materials. Show cars were more like sales floor models, but as the '50s rolled on, the cars began to stretch longer and fancier again. Along came the Corvette, hardtops, fins, Pontiac Parisienne, Oldsmobile Starfire, 1953 Buick Wildcat and more. Each year a new GM Motorama in all it's awe and glory. This book takes us all the way up to the 1959 Cadillac Cyclone, and more.

This is a wonderful collection of photos, loads of information through many generations of GM. This table-top book by David Temple is an absolute classic of a bunch of classics. I highly recommend this book to all show car and concept car aficionados, car show buffs, and anyone who just likes to stroll down memory lane sometimes. (Personally, I got lost when they stopped using specific hood ornaments. I used to love trying to guess what car was driving toward us by the hood ornaments.) For once I'm glad to be as old as I am...I remember them well.
Posted by nightreader at 10:30 PM