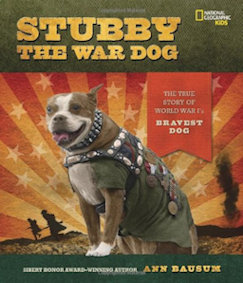 I'm very impressed not only with this book but with its back-story as well, how the author came to believe the story of Stubby and to write it. The fascinating true story of a man and a stray dog who became a war hero in WWI. This book is well-written, historical, non-fiction and a good way for kids to learn about WWI in a unique way. Ann Bausum, on hearing the story at first didn't think it could be true, but soon learned there was incredible evidence to back up this great story.

A young man at the time, J. Robert Conroy discovered a stray dog had decided that they belonged together. The dog was a possible Boston terrier cross with a stub of a tail so he became known as Stubby. They became inseparable and when WWI loomed on the horizon Conroy enlisted but Stubby apparently considered himself enlisted too, even to the point of learning how to salute by standing on his hind legs and raising his paw to his face. On parade, he learned the "eyes right" command as well.

Once Conroy was shipped overseas, Stubby went, too. He was assigned to be the Yankee Division's mascot. There were actually several animal mascots and workers in the war, but Stubby became an active member. Ann Bausum delved into a lot of military and WWI history to write this wonderful book. It is written especially for kids and they will enjoy it, I'm sure. It is a story about a very special bond, the book is almost entirely the heroic deeds of this dog and not the bloody side of the war.

Stubby was able to warn the troops about chemicals coming, snipers sneaking up on them in their trenches, rescued injured soldiers, could tell the difference between the enemy and his own soon enough to warn them. He even captured an enemy soldier himself. He was injured in the line of duty, but fortunately survived at the hands of the medics. Stubby was a genuine decorated hero, met three presidents, and definitely has a place in history. I highly recommend this book, it is timely this close to 100 years ago, and is suitable for all ages.
Posted by nightreader at 3:13 PM